Dr. Paul Kennedy has been caring for pets in Prince Rupert since 1976 when he founded Pacific Coast Veterinary Hospital, for which we thank him! 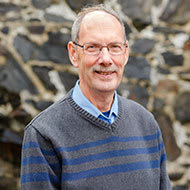 Dr. Kennedy grew up on a dairy farm where being surrounded by animals was the norm.

As a child, he enjoyed watching the veterinarians who came to the farm and decided that he would pursue a career in veterinary medicine.

After working as an associate veterinarian for three years, Dr. Kennedy decided he wanted to own a practice and founded Pacific Coast Veterinary Hospital in Prince Rupert in 1976.

At home Dr. Kennedy has his very own menagerie of dogs – a Dachshund, Poodle Cross and Chihuahua.

In his spare time he enjoys travelling, camping, gardening and curling.

Back to Our Team